I have been the star of the show a few times in my life.

When I was sitting in the hair and makeup chair behind stage before The Merchant of Venice, I remember having a moment of introspection. The girls doing my hair and makeup were putting all this effort into making ME looking good, but they were the ones doing the thankless job behind stage and not getting any glory.

I asked one of them if she minded being the silent star of the show, the girl who made it all happen behind the scenes.

She said she loved it.

It was the first time I had realized not everyone likes being the star.

I had always assumed that the best place to be was on stage, but not everyone likes being the star. Most people don’t.

Even though not everyone is cut out for the stage, I think every now and then being the star of some type of show is healthy and beneficial.

Being able to sit back and let people dote on you is something that many people struggle with, but it’s necessary and good at times to allow others to do the behind the scenes work so you can shine.

Recovery postpartum, being a bride or groom at a wedding, having a bachelor or bachelorette party, retiring from work, celebrating birthdays, recovery from surgery, being ill – all these times of life tend to involve others “doting” on us.

Sitting back and letting others help us, serve us, love us, and celebrate us can be hard for some of us, but we need to learn to let them. It’s actually healthy to sit back and be the star every now and then.

As contradictory as it seems, it actually brings joy to people to bring joy to you.  It’s a service to others to let others serve us. By allowing people to help us and to serve us, we are showing them that we appreciate their love.

But no matter who you are, we all need to be the star of the show every now and then.

I have been neglecting this blog, so my New Year’s resolution is to write more!  *frantically grabs laptop and tries to knockout a quick post while daughter sleeps*

Now that Christmas is over, the era of FUN winter is over. Now, winter is in full blown CRAP winter mode, and so I am trying to think happy thoughts and keep plants and flowers around the house to remind myself that spring will be here eventually.  *sobs quietly into a mug of hot cocoa*

My mom and dad recently visited the Shrine of Our Lady of La Leche in Florida, and they brought me back this gem of a book called “A Mother’s Manual” by A. Francis Coomes, S.J. (For those non Catholics here, S.J. stands for Society of Jesus- the Jesuit order). It’s a tiny book that can fit in the palm of my daughter’s hand, and it’s absolutely precious. There are prayers for expectant mothers, breastfeeding mothers, mothers of children getting engaged, bereaved mothers, and mothers who want to be better wives. Some of the advice in the book is a little outdated – think 1950’s era housewife stuff – but the beautiful devotions for moms really make it worth it. It’s less than $5, and I think it would be a great gift for a new mom (along with a 10,000 calorie meal).

In fact, that’s where my mom first heard of it- it was a gift to her when she was in the hospital after having me! She was gifted it by a nun who visited moms in the hospital who just had their babies (what a beautiful vocation!). My mom still has her copy (dog-eared and underlined!) and has carried the tradition on by giving me my own.

If you’re interested in ordering it, this is the book:

My second New Year’s resolution is to read 25 books, and for once in the history of anything I have ever tried, I am on track! Look at the encouragement from Goodreads! 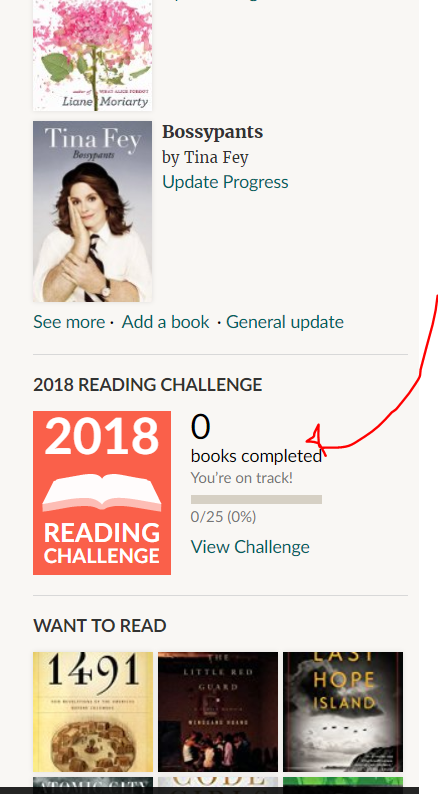 If only all things in life were this encouraging.

I’ve been trying to branch out of my comfort zone with reading. This means, instead of my usual fare of classic literature and modern fiction, I am trying to read more non-fiction. This list from Bill Gates really inspired me to read more about science this year.

Another New Year’s resolution is to start working out again, because having had a baby two years ago really means I can’t keep referring to my tummy as a “postpartum pooch”.  I’m giving intermittent fasting a try, and also only eating 6 chocolate chip cookies per day.  Praise meeee.

I don’t usually like New Year’s resolutions- they stress me out, and in general I don’t keep them. But maybe I can keep these!

I love the summer for many reasons- hundreds, probably, but perhaps one of my favorite of the lesser of these reasons is the soothing and silly night time show, America’s Got Talent. My husband and I get excited on Tuesday and Wednesday nights in the summer, blocking off the time to make sure we won’t miss an episode.

It’s goofy.  The judges’ lines seem cheesy and scripted.  The pre-recorded shows are heavily edited and curated to appeal to a mass audience. Nothing about this show’s production is very original or intelligent.

It’s bombastic and at times ridiculous.

I have many a fond memory of the first few months after my daughter’s birth, nursing her in the midst of postpartum anxiety, and being able to briefly let go of all the worries of new motherhood and just watch the inane and vapid unfold before my eyes.

The bickering of the judges, the silly jokes, the crazy costumes, and of course, the horrible and cringe worthy auditions of people who got buzzed off the stage.

The beauty of America’s Got Talent, though, is that it’s not ALL inane.

There is something stirring and rousing in seeing humanity perform at its best.

The deaf girl who sings better than Taylor Swift.  The 12 year old who is a self taught ventriloquist.  The plane crash survivor disfigured by burns who finds the courage to sing in front of millions.  The dance crew from Ukraine who perform gasp inducing stunts with lights that make you feel like a child watching magic for the first time.

The little girl with an angelic voice whose father died of cancer just two weeks before her final performance on the show.

The human spirit is indomitable.

Being able to capture the beauty of life and distill it down into an art form that people can watch, admire, cry at, and discuss over and over is a beautiful thing. The magic of a performance done well –  of art that is truly good – is that it elevates the human spirit. It truly captures what it means to be alive.

I recently finished the book “Station Eleven” by Emily St. John Mandel due to a good friend’s recommendation.  The book is set in a world that has been ravaged by a deadly flu, and among the remaining survivors; a ragtag band of actors and musicians is formed. The troupe performs Shakespeare plays while traveling the Mad Max reminiscent landscape, but people still come to their shows despite the danger.

The concept of the arts surviving in a post-apocalyptic world is a fascinating idea.

We work to make money, and with that we have a triage of needs. We make money to spend on the necessities- food, shelter, warmth- and then we use it on the things we enjoy.  The things we enjoy, the arts and crafts of this world – are things that make life worth living.

These things are not necessary for survival, but they make survival enjoyable.

It would certainly make sense then, that art would outlive electricity.

So, when I watch America’s Got Talent, I marvel at the talent of humanity. The precision the dancers have. The perseverance the dog trainers must have to train their animals to do crazy stunts. The courage of the deaf girl who sings in front of millions, with no idea how her voice sounds.

Humanity is truly astounding. We are a varied bunch, a ragtag troupe. All of us have something unique to offer the world. It might not be a flying trapeze act on America’s Got Talent, but it is still something beautiful and innately you.

And so, to all the guilty pleasures out there, I salute you.

I promise, this is not just another mommy blog.

I love to write.  I’ve been encouraged to blog by many people, so I decided to finally start one. I know everyone has a blog these days, so I doubt my contribution will be much of a ripple in the pond that is the mommy blog world, but hey.  A girl can dream.

I drink a lot of coffee. Probably too much for my own good because I get chest palpitations sometimes after my second or third cup o’ joe. Yes, I realize this is a problem.

I love literature and I read books. A lot of books. Being a stay at home mom has enabled me to finally finish the hundreds of books I have always wanted to read.

I’m a practicing Catholic and I love my faith.

I love to act.  When I think of death bed regrets, the biggest regrets I can imagine are not loving God or my family enough, and never having starred in a major production. My college performance as Portia in The Merchant of Venice doesn’t count, in my book.

My favorite pastime is eating.